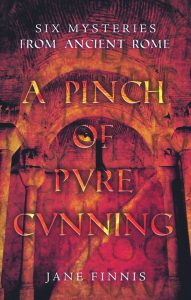 My new book is out now! In this collection of short stories, you can buy six Roman mysteries in a single volume, A PINCH OF PURE CUNNING published here in the uK by Matador. Several of the tales feature Aurelia Marcella and her inn in northern Britannia, but there are other sleuths and settings too. From the wilds of northern Britannia to Rome itself, these stories bring to life the Roman Empire in all its variety. It is published in the UK by Matador, the stories are available as a paperback and also in all the standard ebook formats.

Most of the tales have appeared in mystery-themed anthologies over the years, I’m proud to say. Now I’m even prouder that, for the first time, you can buy all my Roman short mysteries in one book.

There are now three in the “Book of Extraordinary Mystery Stories” series, edited by Maxim Jakubowski and published by Mango Publishing in the United States. Each contains an exciting mix of tales, including one of my Aurelia Marcella mysteries.

In 2017 Poisoned Pen Press published Bound by Mystery to mark their 20th anniversary. It’s a terrific selection, with 35 of their authors contributing, including Yours Truly. Poisoned Pen Press is now part of Sourcebooks, and their mysteries, long and short, are still as good as ever.

And to prove I write about more modern times and subjects too:

The 2014 Crime Writers’ Association mystery anthology was published by Severn House. The 24 stories in this anthology are by members of Britain’s Crime Writers’ Association. The CWA produces short-mystery anthologies regularly, and the 2014 collection is edited, like all the recent CWA collections in the series, by award-inning author Martin Edwards. My story, TELL IT TO THE BEES, (NB not about Rome!) has its roots in my childhood when our family kept beehives. and I, like the story’s narrator, used to go and talk to the bees…though happily I never found myself in the situation she ends up in.

GUILTY CONSCIENCES is another Crime Writers’ Association anthology, edited by author Martin Edwards and published in 2011 by Severn House. There are 17 mysteries in all, and my story, ALL THAT GLISTERS, is set in the modern big-business jungle of corporate London, but there are shadows from the past, including from the remote early British world of 2000 years ago. Then as now, gold may not always be what it seems.

The Mammoth Book of Roman Whodunnits was published in 2003 by Robinson (UK) and Carroll & Graf (USA). Edited by Mike Ashley, it is available in Kindle or paperback from Amazon USA and UK. It contains 20 stories spanning eight centuries of Roman history. My story, THE CLEOPATRA GAME, is set in the 70s AD in Rome itself. A young Egyptian heiress in Rome tries to imitate the legendary Queen Cleopatra in everything she does…with tragic consequences.